1110 shares
This post may contain affiliate links. A Nerd Cooks may collect a share of sales or other compensation from the links on this page. More information can be found here. 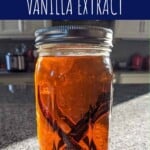 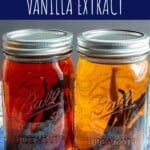 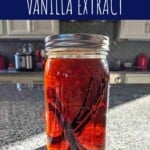 Last Updated on August 9, 2021 by laurenpacek

This sous vide vanilla extract is just what you need to kick start your holiday baking! Make it with vodka OR bourbon, depending on your preference!

Every baker needs a good quality vanilla extract in their pantry

This is true no matter what time of year it is. BUT! The holiday season is upon us!

If you're like me, there will be a lot of baking going on at this time of year. And just about every recipe for baked goods lists vanilla extract as an ingredient.

"Why is that?", you might be asking. Well, vanilla extract's role in baked goods is sort of the same as salt in savory foods (though you should definitely also use salt in all of your baked goods... a lecture for another day): It enhances all of the other flavors in the recipe.

Since it's an integral ingredient, you might as well make it a good  quality one!

Why make it yourself instead of buying it at the store?

Sure, you can buy vanilla extract at the store. I do it sometimes. BUT I'd argue that there are some pretty good reasons for making your own at home.

Now, let's talk about this homemade version. Let's assume that you're making this with a mid-range vodka (Smirnoff; which costs about $0.42 per oz), quart Mason jars (32 oz), and vanilla beans that cost about $3 per bean. You with me?

You can customize your vanilla extract to meet your preferences.  Take each of the preparations in this recipe, for instance. I think the more typical preparation would involve the use of plain vodka. It's great that way.

BUT I tend to prefer my vanilla made with bourbon. Y'all know that I have a serious affinity for the stuff. Just take a look around my blog.

Basically, you do you. Make one, or both! Either way, you know it's going to be great quality stuff that tastes fantastic.

Speed! (thanks to sous vide)

Making homemade vanilla extract the old fashioned way (putting split vanilla beans in a container with liquor and then stashing it away) can take weeks or months to make.

When you make it with sous vide, you're done within a matter of hours! That means you can start baking that much quicker.

What should I make with this homemade vanilla extract?

If I may, allow me to make one specific suggestion. The bourbon version of this homemade vanilla extract would be particularly good when baked into these Maple Bourbon Chocolate Chip Pecan Cookies. There cannot be enough bourbon flavor.

Looking for other recipes that can be made using sous vide?

I made some really delicious Homemade Sous Vide Limoncello earlier this year. Peel some lemons, add some vodka, and sous vide for a couple of hours before mixing with some simple syrup. Boom. Done.

And let's not forget my Crab Cake Eggs Florentine! The hollandaise sauce was made using the sous vide. It seriously couldn't have been easier. If you're having people over for brunch, I'd definitely recommend this method for making hollandaise. Please also don't forget about these Sous Vide Eggs. They are impossibly creamy and velvety in texture, not to mention delicious. They're perfect for meal prepping, too.

OH! And don't forget about my Sous Vide Chocolate Cheesecakes. You can even make them with this vanilla extract.

When talking sous vide I always need to give a shoutout to Chelsea over at A Duck's Oven. Her blog is fab, and her sous vide cookbook is 10/10!

AND if you're looking to invest in an immersion circulator/sous vide, consider this one from Anova. I have the model that was available prior to this newer one, and really like it.

This calculation is based on a 1 tbs serving size.

What kind of gear will I need to make this vanilla extract?