3072 shares
This post may contain affiliate links. A Nerd Cooks may collect a share of sales or other compensation from the links on this page. More information can be found here. 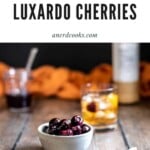 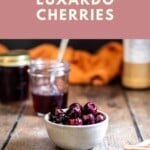 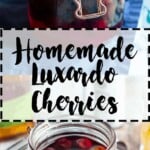 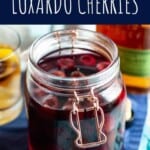 Homemade Luxardo Cherries (aka Maraschino Cherries) can really elevate a cocktail. They add that special *something*.

What are Luxardo cherries?

They are the OG fancy cocktail garnish cherries.

I bet you have had Luxardo cherries if you've ever ordered a cocktail and it had a really delicious cherry in it as garnish. Either that or maybe it was a brandied cherry. Both are quite good.

What makes Luxardo cherries so special?

I think many of us tend to think about the neon pink/red Maraschino cherries that you buy in the grocery store. These cherries are nothing like those.

So what makes them so different? First of all, they're delicious.

To achieve such a high level of deliciousness, Luxardo cocktail cherries take a bit of a warm bath in, and get their distinctive and delicious flavor from, Luxardo Maraschino liqueur. Plus some sugar and spices, of course.

What is Luxardo Maraschino Liqueur?

According to an article on Epicurious, Luxardo was once a distillery in present-day Croatia (at the time, the area was an Italian province). The company became famous for its cherry liqueur, called Maraschino, made from marasca cherries.

They distilled the liqueur from ripe marasca cherries (a kind of sour cherry), their crushed pits, branches and leaves, honey, and various other secret ingredients.

In the early 1900s, the distillery started selling selling cherries that were candied in a syrup of marasca cherry juice and sugar. And thus, the OG Luxardo cherry was born.

While it does have a cherry flavor, you'll also notice floral, piney, and nutty flavors, too. It's really interesting! The pits of the marasca cherries are responsible for the nutty flavors you'll notice.

What kind of cherries should you use?

I used regular old dark red sweet cherries that you'll find at just about any grocery store. You can use sour cherries if you want, too! It's really just a matter of personal preference. Several readers have commented that they've used sour cherries, with good results. You do you.

What should you do with these Luxardo cherries?

Personally, I'd recommend plopping them into a strong cocktail. As a bourbon lover, I happen to think that they are particularly good in an Old Fashioned.

If you are looking for a non-boozy drink, you can totally plunk these guys into a Shirley Temple. However, because these maraschino cherries are made with a liqueur, I probably wouldn't recommend serving this to your kids.

Can you preserve these cherries?

I haven't done it personally, but several readers report that these cherries can be canned! Make a bunch, can 'em, and enjoy homemade Luxardo cherries for a long time to come.

What should you make with leftover Luxardo liqueur?

Worry no longer! If you have leftovers, please consider making my Cheerwine Sangria. You will not regret it.

Or... And just hear me out here... Just make more Luxardo Cherries! They're delicious and great for gift giving. And like I said above, you can can them for later!

Looking for other delicious additions to your home bar?

Where did this recipe come from?

This recipe was adapted a bit from the one found at Love & Victory.

This is based on the estimate that 1 lb of cherries contains approximately 80 cherries.

What equipment will you need to make these cherries?

Not much that's out of the ordinary, but...

Old photos from the original blog post are below. Look at your own risk 😉