21 shares
This post may contain affiliate links. A Nerd Cooks may collect a share of sales or other compensation from the links on this page. More information can be found here. 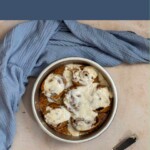 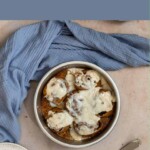 These pumpkin cinnamon rolls are sweet and warmly spiced. They're also slathered in some sweet maple cream cheese icing. What could be better?

What ingredients will you need to make these cinnamon rolls?

I know that the list of ingredients might look a little overwhelming. And, yeah. It's kind of long. BUT it's all pretty accessible stuff! Let's walk through it.

See? It's a lot, but all basic stuff. You got this.

How do they come together?

It's a multi-step process. But stick with me, please! It's not hard at all, and is totally worth it in the end.

You'll start by combining all of the dry ingredients in the bowl of a stand mixer, mixing them well, and ensuring that everything is well-combined. Wet ingredients will be combined in a microwave-safe bowl and given a little zap in the microwave.

Next, wet ingredients will be added to the dry, mixed to combine, and then kneaded until a shaggy dough ball forms. You'll let the newly formed dough rise until it has approximately doubled in size.

Next, make the filling

The filling comes together in 2 steps. First, you'll want to combine the dry ingredients. Next, melt the butter. You don't need these things just yet, so set both components aside for a bit.

Then... Make the cinnamon rolls!

Now that your dough has doubled in size, you'll turn it out onto a floured surface and roll it out into a rectangle that's approximately 12x10 inches in size. It doesn't have to be perfectly exact.

Pour that melted butter onto the rolled out dough and use a pastry brush to spread it allll around. Next, take the sugar/spices that you mixed up and sprinkle that in an even layer over the melted butter.

Now it's time to roll everything up. Starting on a long edge, roll the dough up as tightly as you can into a cylinder. Cut the dough into 12 rolls and plunk them into a baking dish. Let the dough rise a second time (Unless you're making them ahead of time! If so, see instructions on that below) before baking them until puffed and golden brown.

While the cinnamon rolls bake, you'll want to make the icing. Basically, you just combine all of the ingredients and beat until combined.

Spread the icing onto the warm cinnamon rolls once they come out of the oven. at and enjoy!

Can I make these the night before?

You sure can! In fact, it's my preferred way of making cinnamon rolls.

If you want to save yourself some effort for the following morning, do this: The night before you want to eat delicious pumpkin cinnamon rolls, you'll want to follow all of the instructions up through putting the sliced (unbaked) rolls into a baking pan. Cover the baking pan with plastic wrap and stash it in the fridge.

The next morning, let the rolls sit on the counter for a bit to rise a little. Take this time to make yourself some coffee. Once the cinnamon rolls have risen a bit more, pop them in the oven and proceed with the instructions as normal.

Looking for other cinnamon roll recipes?

Take a look at these regular, plain Make Ahead Cinnamon Rolls. If you want something a little fancier (and Mardi Gras-appropriate), I also have King Cake Cinnamon Rolls!

Where does this recipe come from?

This recipe comes from the cookbook Cooking with Pumpkin.

These cinnamon rolls can also be assembled made the night before, to cut down on prep time in the morning. to do that:

What gear should I have in order to make this recipe?