394 shares
This post may contain affiliate links. A Nerd Cooks may collect a share of sales or other compensation from the links on this page. More information can be found here.
Jump to Recipe

Last Updated on December 2, 2021 by laurenpacek

If Apple Cider Donuts don't say "Fall", then I don't know what does.

These donuts have a lot going for them: lightly tangy apple cider flavor, dense cake-y texture, and crunchy cinnamon sugar coating. There's no wrong way to eat them, but trust me when I say that these donuts are at their best when eaten fresh and hot.

If you're wary of making fried donuts at home, don't be!

I've shied away from making fried donuts in the past because, frankly, I was a little intimidated. I stuck to baking my donuts in a donut pan. Not that there's any shame in doing that. Baked donuts are great, too!

But I'm here to tell you that frying your own hot, crispy-on-the-outside, tender-on-the-inside donuts at home really isn't a big deal! There's a little bit of forethought involved, since you need to prep the dough, let it chill, and cut out the donuts. But once you're past that, it's pretty simple and everything comes together quickly.

How do these donuts come together?

First, you heat canola oil in a heavy bottomed pot (Dutch ovens work well here) until your candy thermometer lets you know you've reached the desired temperature. Gently add the donuts (avoid splashing the hot oil!), flipping them a couple of times over the course of 2-3 minutes so that they cook evenly on both sides. Let the cooked donuts drain a little before tossing them in a big dish of cinnamon and sugar. And there you have it!

Looking for other donut recipes?

I've shared baked donuts with you before. Check out these (aptly named) Easy Chocolate Cake Mix Donuts and Pumpkin Streusel Donuts for a a couple of examples.

This Apple Cider Donuts recipe is ever so slightly adapted from Table for Two.

For the cinnamon-sugar coating

To prepare the donut dough

To make the cinnamon-sugar coating

To fry the donuts 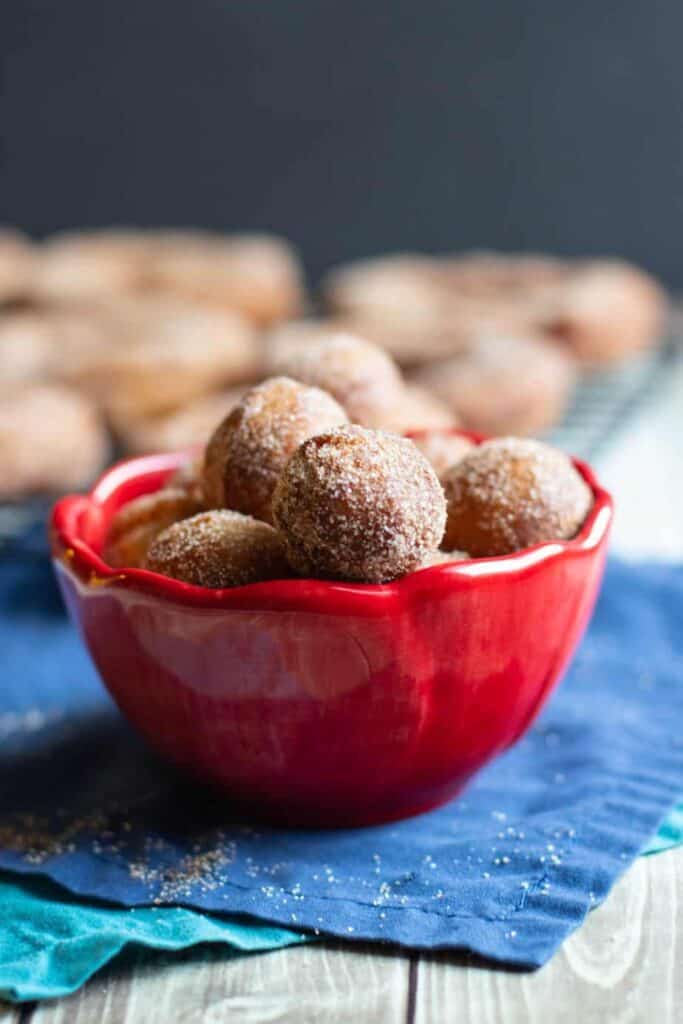 Hi, I'm Lauren! I'm the recipe developer, photographer, and writer here at A Nerd Cooks. I'm a 30-something wife, mom, and scientist with a passion for mixing cocktails, brewing buzzy coffee drinks, and making other delicious beverages at home.