36 shares
This post may contain affiliate links. A Nerd Cooks may collect a share of sales or other compensation from the links on this page. More information can be found here. 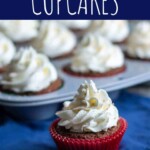 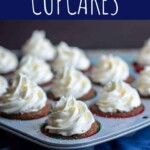 These cupcakes are so delicious

These Hot Chocolate Cupcakes are taste just like a big mug of hot chocolate! They have fudgy chocolate cake, marshmallow creme filling, and a generous swirl of whipped cream frosting!

And really, what could be better? At this time of year, when cold weather abounds, I'd argue that almost nothing can beat it. Except, maybe, having a mug of hot chocolate along with your hot chocolate cupcakes.

The base of these cupcakes is actually a brownie cupcake, so it's sweet and dense. And what's hot chocolate without marshmallow AND whipped cream? Almost not worth drinking, I'd argue. Or eating, in this case.

Fortunately, these cupcakes have it all!

How do these cupcakes come together?

Next, you'll make an easy stabilized whipped cream frosting and frost these bad boys! I gave these cupcakes a generous, tall swirl of frosting.

Have you ever made whipped cream (intended to be used as frosting or otherwise), but after a while, it kind of deflated and got weepy?

Well, using unflavored gelatin to make stabilized whipped cream helps to overcome these issues. It will stay basically the same way you piped it without deflating or starting to get watery.

Show us a cross-section of the cupcake!

I took a quick photo after taking a big bite of this cupcake while in my office the other day. It's not the best quality photo, but you can see the marshmallow creme in the middle.

The cupcake base is a slight variation on the Double Chocolate Brownie Cupcakes I've showed you before. Live Well Bake Often has a great tutorial and recipe for stabilized whipped cream.

The combination of the two + the marshmallow creme came from my food brain.

For the stabilized whipped cream frosting

To make the cupcakes

To assemble the cupcakes

What gear will I need to make these cupcakes?