27 shares
This post may contain affiliate links. A Nerd Cooks may collect a share of sales or other compensation from the links on this page. More information can be found here. 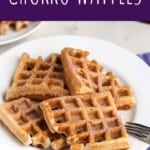 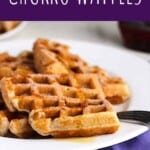 These Churro Waffles are tender, sweet, and slightly crunchy on the outside!

I drizzled these waffles with just a bit of maple syrup. They'd be great with a chocolate sauce, too. I love how that bit of syrup looks, pooling on the napkin.

These churro waffles are a jazzed up version of my Classic Waffle recipe. If you're looking for other waffle recipes, also check out my Pumpkin Waffles and Sweet Potato Waffles with Candied Pecans.

For the churro topping

To make the waffles

To make the churro topping