Jump to Recipe
This post may contain affiliate links. A Nerd Cooks may collect a share of sales or other compensation from the links on this page. More information can be found here.

Last Updated on October 30, 2020 by laurenpacek

Mezcal Apple Cider Margaritas are sweet, smoky, and so very delicious. They’re rimmed with cinnamon, sugar, and salt, for a tasty contrast to the flavors of the drink itself. 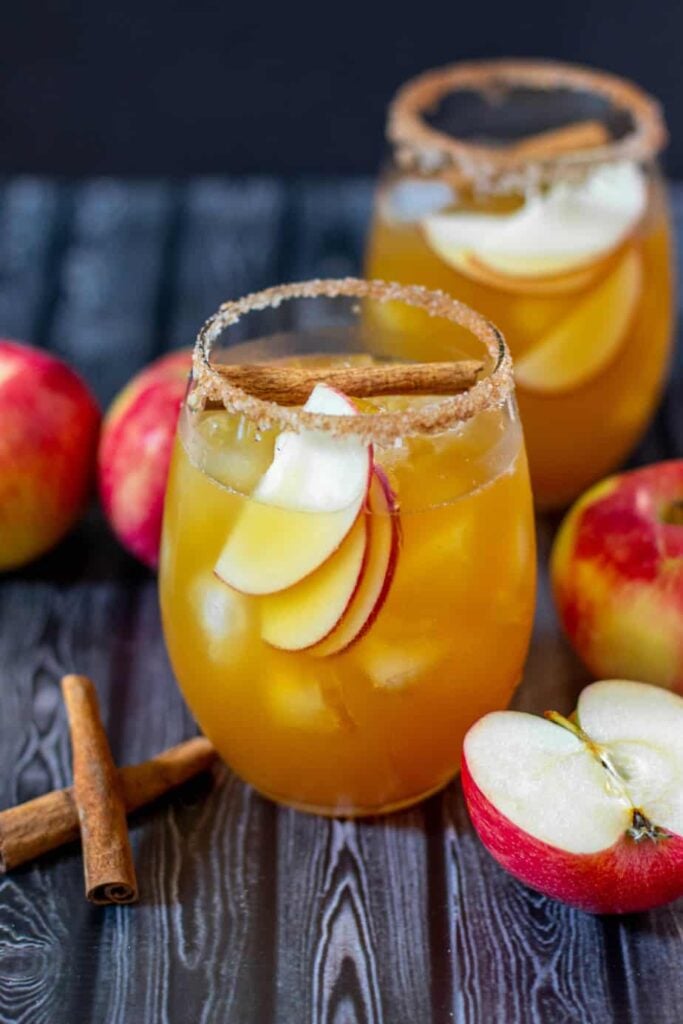 You can think about mezcal as sort of being like… tequila’s smoky-flavored cousin.

You can drink straight it straight or add it to mixed drinks, like I’ve done here. It’s a fun way to mix things up a bit as a replacement for tequila, but also a perfectly delicious spirit in its own right. Carefully add ice cubes to your rimmed glasses. Then, add your liquors, lime juice, and apple cider to a cocktail shaker with ice. Shake, shake, shake until super cold.

Strain the marg into your rimmed glass and garnish with apple slices (yay edible garnishes!) and some cinnamon sticks, if you’re feeling fancy. Next, sip and enjoy. Cheers! Okay, so I’ve got Apple Cider Margaritas that use tequila, too. Definitely check them out. And don’t forget about Apple Cider Mimosas.

And alright, I know that this isn’t a drink, but please make some Apple Cider Donuts. You won’t regret it.

To make the Cinnamon-Sugar-Salt Rim

What should I have on hand to make this?